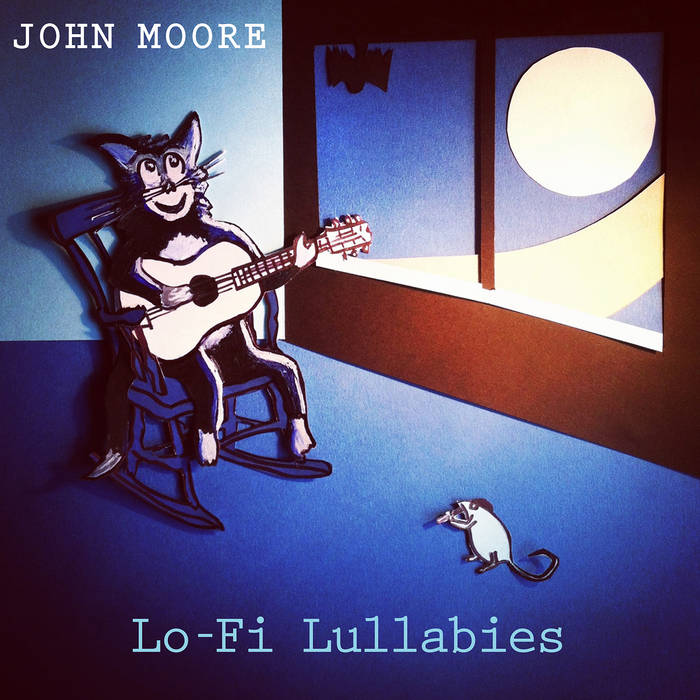 Lo-Fi Lullabies is a collection of songs I recorded in the early nineteen nineties. They were mostly home recordings, with a Tascam 424 Portastudio, onto cassette, through a Sony Condenser mic. At the time, they were intended as demos for some glorious, high budget sessions that never came.

A bit of background: Having been sucked up in The Jesus and Mary Chain whirlwind, a fraction too young, I’d then been signed by a major label, and whisked off to New York, to become a superstar. Three wild years, of diminishing returns, and I was dropped and returned to London, to start again.

I was in the strange position of being penniless, but owning a top floor flat, with a beautiful view of the Westway. I read a lot, drank a lot, and ‘experimented’ with substances I have long since abandoned. However, in this Bohemian squalor, I began to improve as a songwriter.

Before, I’d hardly even had my heart broken, now it was smashed beyond repair – or so I imagined. The dewy-eyed pop songs that earned me a deal with Polydor, were replaced with sad, reflective, and increasingly articulate writing. It was a painful lesson, but I think, worth it in the end.

I must have been a nightmare to be around back then – self-pity, self-loathing, and self-important, but I began to see the funny side of it. My best friend, Karel, was a dark genius, who gave me books – Celine’s Journey To The End Of The Night, Genet’s Our Lady Of The Flowers - he lent me a box of Jacques Brel records, and these, along with my own musical heroes, gave me food for thought.

I had a three-piece band, very minimal, cello, guitar, and percussion. Very unwisely, we called ourselves Revolution 9 – it was Katie, the percussionist’s idea. She thought my choice of Siberia sounded like a Euro metal band. It was quite a nice part of the self-flagellation to have such a bad name - to throw the race before it had even started.

Our gigs, when attended at all, were religiously quiet affairs – too reverential for my liking. I preferred it when we were totally ignored and talked over – maybe enjoying the punishment too much. Still, we managed to score a record deal, which seems ludicrous these days. Not as lucrative as the Polygram deal, but enough to live on for a year. David and Katie had very good jobs already, and it almost killed me to split the lolly – but I did.

We became, inexplicably, popular in the Czech Republic, and toured there several times, with financial support from the Czech Arts Council. We were the first western band to play in Byrno – which must have been a hideous disappointment for the rock fans in the audience.

A two-day bus journey home, where I sat above the wheel arch, led to the song Clouds Roll By – All I could hear was spinning for days afterwards. The band amicably drifted apart, just as it should. Never an argument, never a fight, just one day it wasn’t there anymore.

Lo-Fi Lullabies is all about endless days on the couch, smoking roll ups, drinking absinthe, and falling asleep.

Floral Tributes includes the tail end of these days. I found three jazz musicians in the free ads, Frey, Lawrence, and Ben. This was a band that might have happened, had we stayed together long enough. The songs were fuller, more developed, and had we made it into a decent recording studio…but then success would kill the vibe.

It’s unfortunate that it stalled, but then came Black Box Recorder. It wasn’t intended to take up the next fifteen years, but it did. I missed the songs of Floral Tributes and Lo-Fi Lullabies, but they were nothing like BBR, they were much too personal.

Having moved to the flat I’m in now, I began writing and recording Floral Tributes again - in the front room, of course - perhaps all my songs should be described as ‘Lounge Music’. That some were made so many years apart seems unimportant. The feeling was the same.

It took a long time to realize these songs HAD been recorded properly – that’s what they were. Cassettes, written on in biro, and wrapped in polythene to keep the damp out.

Maybe I’ll do them all again one day, with an orchestra, at Abbey Road, but if I drop dead first, it won’t be the end of the world.

All songs written by J Moore. Published by Cacophony Ltd
©The Germ Organization 2017

New sounds from Mavi, Ivy Sole & Moderator, plus AJ, the One joins the show, for her latest release