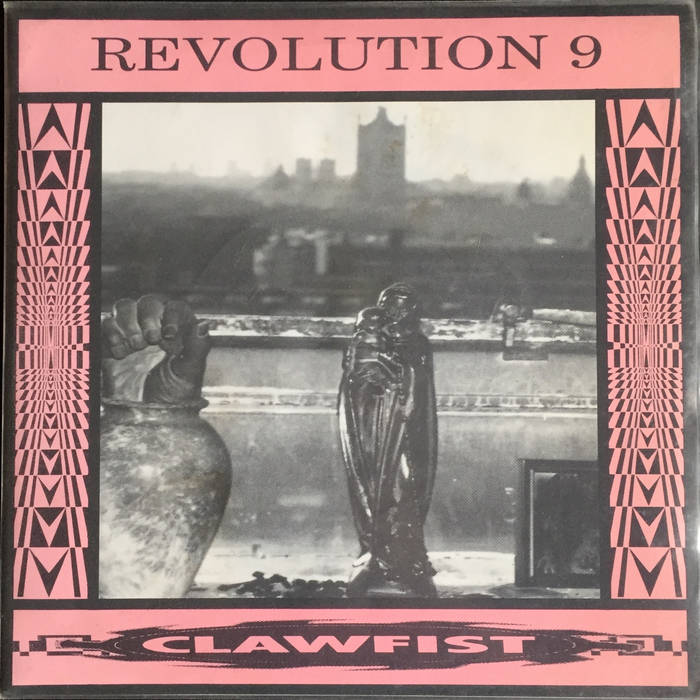 Clawfist Singles Club. 27
Side 1 – Living With You
Side 2 – Wintersong, So Much For Love

And then there was this...the winter of '95 was a hard one, lots of snow, sub-zero temperatures, and a central heating boiler giving up the ghost.

Revolution 9 continued to weave its spell to mainly disinterested audiences and empty rooms. Anybody who did like us was regarded with suspicion, especially when they trotted out the line about how ‘in a perfect world we’d be massive’.

Having been eviscerated by the press for my previous band, I was now treated to some very reverential reviews in the ‘mostly defunct’ music papers. Usually headlined with phrases like Silence Is Golden, they filled up the awkward spaces beneath bigger reviews.

The Melody Maker called us 'the fourth best band in England', and, 'the seventh best band of all time'. However, the power of the press meant very little in our case, and our anonymity remained intact.

We were thrown a lifeline when Nick Brown of Clawfist Records invited us to be part of his Singles Club. An excellent label, it was some justification at last, and every musician likes having an actual record made, something they can touch, and spin at 45rpm.

It was to be a three song EP, comprising two we’d done in actual studios, for our eventual album, and a third, early home cassette recording, which, if I’d attempted to pass it off as a lost Velvet Underground demo, would’ve made me rich.

Quite frankly, I’ve been embarrassed about this one for years – along with much of my early output, actually, but age gives you perspective. Why wouldn’t I want to sound like that at that age? It’s part of the education - that I have to wince and bear it now is part of the fun.

The young me flipping the finger to the old. The old me would reply that these tragic musings on lost love and broken hearts are just a phase, and ‘you’ll get over it, don’t take yourself so seriously, and, ‘If she dumped you, you probably deserved it.’ But I’m glad I did take it seriously…enough to get some songs out of it, at least.

The cover pictures were taken inside my friend Karel’s flat, a tower block in Stockwell, after a fire. After recent events, it was jarring to see these again, and to remember the blackness and the peppery sweet smell. Everything had a viscose film on it, a black shadow, as if from an evil sun. We’d been at the proms at the time, a late-night concert by Wynton Marsalis, and were met on the steps of the Albert Hall by a friend who told us the flat had burnt down and that we needed to contact the emergency services at once.

I have ten of these EPs to sell, should anybody fancy one? They have lain dormant in my record collection for twenty-two years, and have witnessed everything. To those who know how, it may be possible to make psychic recordings from them, or to extract DNA, should you wish to grow another me?

Help return these time capsules to active service. They are in mint condition, never played - unless I played them, and for the past year, at least, from a smoke free home. I will type you a letter of authentication on the (not so) trusty old Remington, and sign them with a very old pen.

Well, for a start, this is not an album, it's an EP - 7 inch, black vinyl, 45rpm. It contains three songs. My (mostly) willing accomplices were Katie Hecker, who played percussion and got us gigs, and David Barbenel on the lower end of things - cello and bass. The virtuoso guitar playing and matinee idol crooning is all my own.

New sounds from Mavi, Ivy Sole & Moderator, plus AJ, the One joins the show, for her latest release